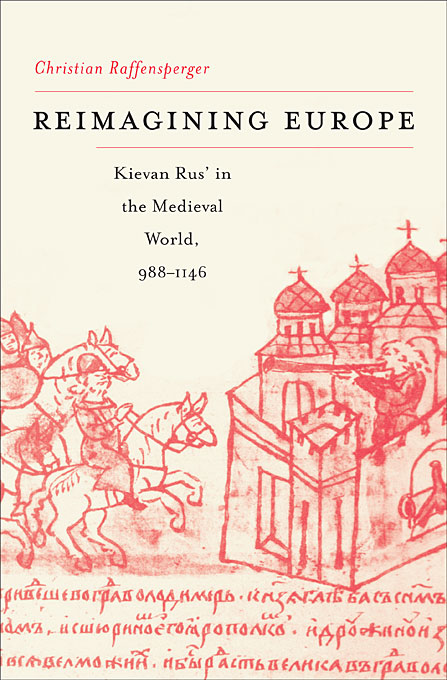 An overriding assumption has long directed scholarship in both European and Slavic history: that Kievan Rus' in the tenth through twelfth centuries was part of a Byzantine commonwealth separate from Europe. Christian Raffensperger refutes this conception and offers a new frame for two hundred years of history, one in which Rus' is understood as part of medieval Europe and East is not so neatly divided from West.

With the aid of Latin sources, the author brings to light the considerable political, religious, marital, and economic ties among European kingdoms, including Rus', restoring a historical record rendered blank by Russian monastic chroniclers as well as modern scholars ideologically motivated to build barriers between East and West. Further, Raffensperger revises the concept of a Byzantine commonwealth that stood in opposition to Europe-and under which Rus' was subsumed-toward that of a Byzantine Ideal esteemed and emulated by all the states of Europe. In this new context, appropriation of Byzantine customs, law, coinage, art, and architecture in both Rus' and Europe can be understood as an attempt to gain legitimacy and prestige by association with the surviving remnant of the Roman Empire. Reimagining Europe initiates an expansion of history that is sure to challenge ideas of Russian exceptionalism and influence the course of European medieval studies.

A daring and original work of scholarship that challenges the traditional view of Kievan Rus'. Historians of both Rus' and Western Europe have generally accepted the idea that Orthodox Rus' was isolated from the rest of Europe in the eleventh and twelfth centuries. Yet the unfortunate separation of medieval history and culture into Eastern and Western blocs has obscured the political reality of early Kiev. In a skillful and effective reinterpretation that draws upon a variety of methodologies, from numismatics and sigillography to genealogy, Raffensperger demonstrates that Rus' was not disconnected from the West, but was instead part and parcel of a broader Europe.

Boldly reconceptualizing the first centuries of Kievan Rus', Raffensperger gives us fresh ways of envisioning royal marriages, ecclesiastical politics, cultural transfer, and the commercial commanding heights of all of post-Carolingian, pre-Gothic Europe, as Christian realms took shape in Scandinavia, most of the Slavic lands, and Hungary.

Especially today, when the cultural, economic, and political boundaries of Europe are the subject of late-breaking news, Raffensperger's book is a timely and persuasive invitation to recall a Europe that stretched from Kiev to London, and from Stockholm to Constantinople. A welcome corrective to a Cold War vision of Europe.

Raffensperger's insights into art and architecture, coinage, marriage contracts, the choice of saints, rulers' names, and the contacts between churches illuminate a dark period in Rus'ian history. Had the Rus'ian church adopted Latin or Greek, had eastern horsemen not overrun the principalities, or had the events of 1054 and 1204 not happened, there would have been no question that Rus' was a part of Europe. Raffensperger make a persuasive case that in these years, before central control from Kiev disintegrated, it was.